Word Trek is a brain puzzle game, developed by PlaySimple Games and is an interesting mix of a word search and a puzzle game.

OK, here is your situation. You started to play Word Trek and you liked the game so much that you continued playing it until you got stuck at some level. Well we have all the answers organized in a perfect manner. No matter the level number, no matter the category, no matter the grid size, you can use the search form below. 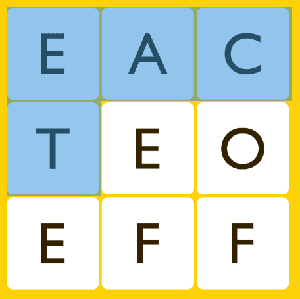 Lets make an example. Suppose you want the answers to the above puzzle. You can enter in the search form 4 letters EACT, than hit Enter. Or you can enter just 3 letters then select the grid size.
Note: if you enter 4 or 5 letters, the results will the better.

Word Trek isn’t the first of its kind, as it rehashes the idea that WordBrain originally came up with and yet, I feel Word Trek has improved on small, little areas that WordBrain lacked.

Gameplay is what you would expect form a word search type game, where you must match all the letters on screen to make a word. When you’ve made one of the correct words, the remaining letters will fall down into place, before resting there. These letters can only form words that are predetermined, meaning that you can’t find words that aren’t perceived as the “correct” words.

When I originally played WordBrain, my minor frustration with the game was that you weren’t allowed to find words that weren’t considered the correct words. While that is still present in this game, which is understandable considering it’s a puzzle game; but what Word Trek does that I do appreciate is the fact that it tells me that my word may be valid, but it isn’t the correct one. It may still be considered an annoyance when you can’t find the correct word, but at least it actually tells you, instead of just shaking the letters a little bit.

In terms of tutorialisation, the game takes a very basic approach to teaching the player, but it does the job well and without issue. Again, my issue with WordBrain was that it lacked an actual tutorial, so once again, Word Trek has improved on a certain area that WordBrain had lacked. Following on from that, Word Trek does a good job of teaching the player on how the more difficult levels are played out and handled, and makes for a great learning tool in the long run.

Aesthetically, the game does tote its own style, that takes a rather minimalistic approach to the game as a whole. The animations, however, don’t exactly feel quite as fluid as other games in this genre, but honestly when it comes down to it, with just how minimalistic those animations are, it hardly matters all that much.

Overall, while the game may not be any different to the game it takes its inspiration from, WordBrain; it does, however, make improvements on such things. One comes in the form of letting the player know that the word isn’t the correct one, and that quickly makes for less confusion in the long run. You add that to the easy to learn tutorialisation the game has and the general nature of managing to teach the player how to play and improve on each and every puzzle that’s thrown at you.

When it comes down to it, it makes it pretty hard not to recommend Word Trek to any puzzle game aficionados and casual players alike.